Many women wonder about what their reproductive anatomy looks like. After all, for many women, their bodies stay something of a mystery for years. Once you learn about your anatomy and you understand what's going on 'under the hood,' it may drive you a little crazy that you can't see everything, like your cervix.

If you become pregnant, your cervix becomes more important. You learn that the cervix goes through a process called dilation before childbirth. You might wonder "what does a dilated cervix look like?" You can't talk about dilation without talking about its best friend effacement. But before we get into all that, let's take a look at your anatomy.

What Is the Cervix?

During pregnancy, the cervix normally remains closed and tight to keep the fetus inside of the uterus until it is time for birth. When labor begins, the cervix gradually opens (dilates) and thins (effaces) to allow the fetus to exit the uterus.

Typical Appearance of the Cervix

The closed cervix looks like a tiny doughnut with either a slit or a dot at the center of it. If you have delivered a child vaginally before, the os or the opening in the cervix will look like a slit. The size of this doughnut usually ranges from 2-3cm -- about the size of a large-ish grape -- and is very firm to the touch.

A typical cervix is usually 4cm long from top to bottom. While many picture the cervix as somewhat flat like a bagel or a cheerio, it's actually taller than it is wide.

A dilated cervix looks unrecognizable compared to its resting state. Pregnancy starts the cervical change process by increasing blood flow and giving your cervix a brighter pink hue. The cervix stays tightly closed to prevent a miscarriage and is secured by a mucus plug, which can prevent infection. During delivery, the cervix gradually becomes dilated and effaced to allow the fetus passage through the birth canal.

Your nurse, physician, doula, or midwife will check your cervix during labor to determine the number of centimeters that you are dilated and the percentage of your cervical effacement.

The cervix opens and thins more with each progressive stage of labor:

With each stage of labor, the opening in the center of the cervix gets larger and the rim gets thinner. Some have described the appearance of a dilated cervix as a sweater being pulled over a head. Dilation is complete when the cervix is dilated to 10 centimeters, or slightly smaller than your baby's head. (So close!) 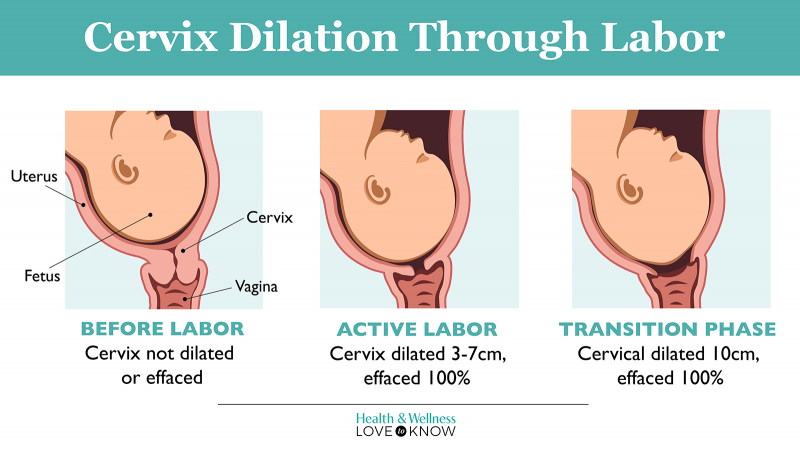 Effacement and dilation occur at the same time. When the cervix is completely effaced and dilated, it should be difficult to see and should look like a rim around the baby's head. At this point, the answer to the question "What does a dilated cervix look like?" is that it looks like nothing -- it is so thin and open that it disappears from visibility from the outside of the body.

Cervical Changes Throughout Your Cycle

The cervix also goes through changes related to hormones and ovulation. It creates mucus, which can indicate what stage of your menstrual cycle you are in.

After menstruation, the cervix is dry and somewhat lumpy with very little mucus. Pre-ovulation, the cervical mucus is white and sticky and gradually changes to a thinner cloudy substance.

During ovulation, cervical mucus becomes clear and stretchy and resembles raw egg whites. Your cervical position may be higher in the vagina and the cervix itself may feel wet.

You can monitor your cervical mucus throughout your cycle by testing its consistency. Many women use these changes as predictors and signs of fertility when trying to get pregnant; using this method can indicate ovulation.

After ovulation, the cervix starts to return to its dry and closed state and prepares for menstruation.

If you could see a dilated cervix all on its own, it would look like a very thin, stretched-out bagel your niece made out of play dough. Your cervix's job during labor is to get out of the way, and it does just that, slowly but surely, until baby passes through.