Have you ever wondered what it would feel like to go one whole month without drinking alcohol? If so, you're not alone. In fact, so many people have had this same thought that it inspired a series of sober months where people challenge themselves to do just that.

One popular sober month is called Dry January. It's one way to kick off the new year with health and wellness in mind, and anyone can participate. During Dry January, people take a pledge to go 31 days without alcohol. At the end of the month, they celebrate their accomplishments. But where did the idea for Dry January come from, and does it actually have health benefits?

What Is Dry January?

Dry January, also known as Sober January, takes place at the start of the year and involves abstaining from alcohol for the duration of the month. It's known as a sober month, like Dry July or Sober September. All forms of alcohol are off limits if you choose to take the challenge. Many people view it as a fun goal to make it through the first month of the year without drinking. Others are curious about sobriety and what it would feel like. And some people view it as a welcome relief after holidays filled with many food and drink indulgences.

January offers people a fresh start with a new year and new possibilities. In fact, many people make New Year's resolutions to help set them up for a great year ahead by making positive life changes. Some people even include Dry January in their resolutions as part of their short-term goals. It offers people a unique way to kick off the month with wellness in mind.

How Did Dry January Start?

Dry January was started by a woman named Emily Robinson who gave up drinking for the month of January. Her goal was give up alcohol while training for a half marathon. She experienced some benefits, such as better sleep, more energy, and she even lost some weight. The results of her dry January were so appealing that she did it again the next year in 2012 when she started working for Alcohol Change UK, an organization that seeks to improve policies and habits regarding alcohol.

Emily Robinson shared her experiences with giving up alcohol for 31 days with her friends, family, and co-workers. Many people were interested in the effects and benefits it had on her. Her idea gained so much interest that the next year Alcohol Change UK launched a Dry January campaign to encourage people to try it for themselves.

In 2013 Alcohol Change UK promoted Dry January. This charity is dedicated to helping people in the United Kingdom evaluate their relationship with alcohol and drink more consciously. They aim to help protect people from alcohol harm, such as mental health concerns and financial difficulties through education and resources.

Who Participates in Dry January? 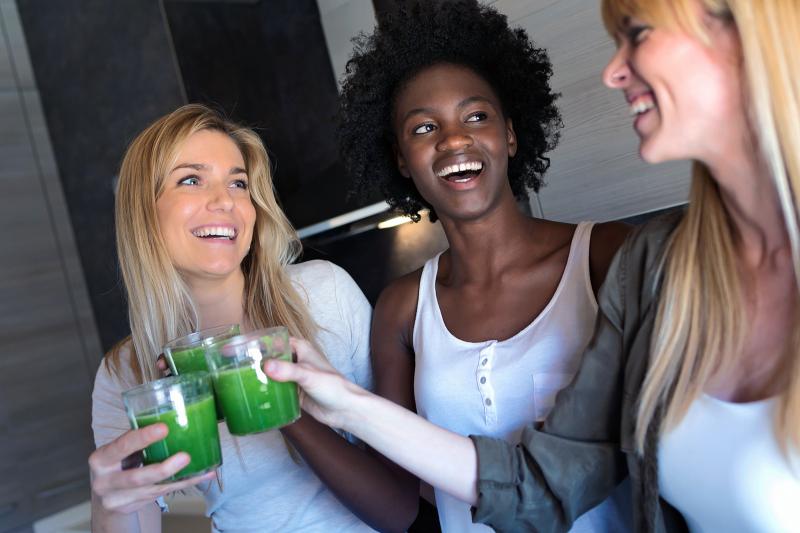 People participate in Dry January for various reasons. Some people want to focus on their health and wellbeing at the start of the new year and want to be more mindful about what they put into their bodies. Some people are just curious about how much money they will save if they go alcohol-free. In fact, the National Association of Alcohol Abuse and Alcoholism has a rethinking drinking tool to help people calculate how much money they will save a week when they ditch the booze. You can participate in Dry January by yourself, or get a group of friends to join you.

Who Should Not Participate in Dry January

People experiencing alcohol dependency should not participate in a sober month, as stopping alcohol consumption with this condition can lead to negative health consequences, according to Alcohol Change UK. For example, people may experience episodes of vomiting or other symptoms of withdrawal depending on their degree of alcohol use.

People that participate in low-risk drinking may be good candidates for a sober month. This would include women that drink no more than one alcoholic beverage a day or men that consume no more than two alcoholic beverages a day. You can perform a self-assessment of your relationship with alcohol by using Drink Aware's test to get a better understanding of how much you are drinking per week.

Benefits of a Dry January

During the first Dry January campaign, Alcohol Change UK partnered with Dr. Richard de Visser from the University of Sussex. Together, they wanted to see how a month without alcohol affected people that participated in the campaign. Some benefits of Dry January and abstaining from alcohol found in Dr. Visser's work include:

The research found that participating in Dry January had profound and lasting benefits for individuals. For example, seven out of ten people that participated in Dry January reported less risky drinking behavior than before they entered the campaign. In addition, almost 25% of participants that were at a 'harmful' drinking level up entering the campaign were at 'low risk' levels six months after.

Some people think that participating in Dry January means that they can't go out to dinner or party at social gatherings. However, that's not necessarily the case. Part of the challenge of Dry January is that you will face situations where you are around alcohol or where people ask you if you want a drink. In these situations, you need to call on your willpower to be able to say no.

You shouldn't have to give up gatherings and celebrations in Dry January. In fact, being tested by these situations might even help you better understand your relationship with alcohol, such as noticing what situations lead to you craving a drink. Don't be afraid to have fun during the month.

Also, if you want to do a dry month, you don't have to wait until Dry January or Sober September comes around. You can pledge to try a dry month on your own whenever it fits your schedule. You also don't have to start on the first of the month, find a day that works for you and start your sober month. For example, you can start a sober month on the ninth of September and go until the ninth of Sober October. There are some tips and tricks you can use to help you along the way.

Make It a Resolution

For many people, January means that it's time to make New Year's resolutions. It's a great time for people to make lifestyle changes that they've always wanted to try. You can incorporate Dry January into your resolutions. In fact, you might be able to have family and friends add it to their resolutions, as well. This will give you a support group for the month as you try the challenge together. You might also find it helpful to have another specific resolution that you can accomplish in just 31 days such as a workout goal or learning a new skill.

Social gatherings are likely to happen during your dry January. People celebrate winter, ring in the new year, and spend time with family and friends. You might find yourself invited to a house party or out to a nice dinner. These events can be obstacles in your Dry January if you are not prepared.

Think about how you will respond when offered a drink. Practice different approaches so that you are ready with a response when the offer occurs. It may be easier to say no to a drink when you've already thought about the challenges and maybe even thought up your responses to offers. You can say these out loud at home, or just think about them before you arrive. Some phrases you might use are:

Offer to Be a Sober Driver

One way to help keep yourself accountable and alcohol-free at social gatherings is to offer to be a sober driver for people that are drinking. This way, you can help prepare yourself for attending the party and resisting any drink offers while you're there. In addition, it might also make you feel good to help out loved ones and make sure that they get homes safely.

Make the Switch To Mocktails 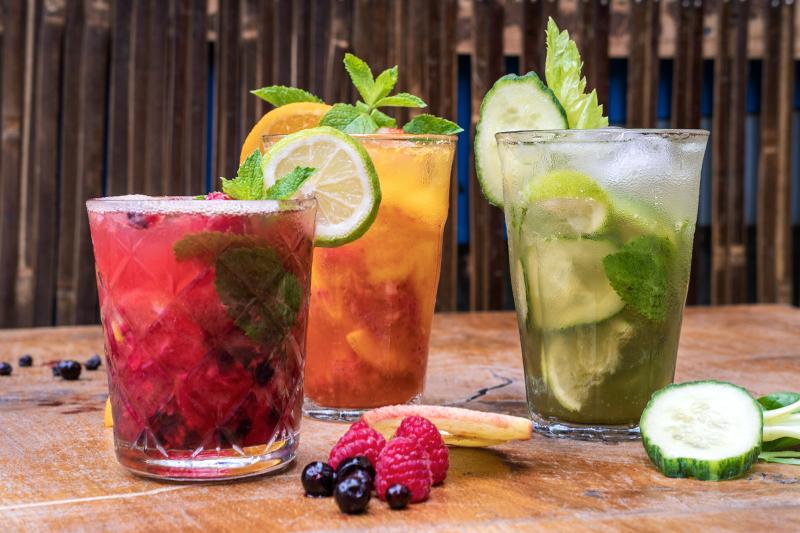 Are you saddened about the thought of not being able to drink your favorite spiked holiday beverages? That's understandable. The good thing is that there are non-alcoholic versions of most of your favorite holiday drinks that can be great substitutes during Dry January. Ask for mocktail versions of whatever drink suits your fancy.

In addition, many bars and restaurants offer booze-free selections on their drink menus. Experiment with different offerings. This way you will be able to enjoy the "drinking" experience but still keep your Dry January streak.

Plus, a lot of people are making the switch to alcohol-free beverages for their own enjoyment. There are several books dedicated to mocktail recipes, such as Good Drinks and Zero Proof that are filled with ideas to get you started. Also, there are even alcohol-free wines, liquors, and spirits from brands like SeedLip, Ritual, and Free Spirits.

Bring Your Own Beverages

Another way to enjoy social gatherings during Dry January is to bring your own non-alcoholic drink to parties. This is a great way to ensure that when you get to a family dinner or a party with friends that you have something to drink that you enjoy, and that doesn't contain alcohol. In fact, if you bring your beverage to a dinner party, you might just be able to encourage others at the table to make a drink swap, as well.

There are even cans of water, such as Liquid Death, that are designed with logos featuring skulls and cool graphics to look like beer cans and seltzers. These can help you feel like you're a part of the part environment, and also make it look like you are drinking an alcoholic beverage, which can deter people from asking you if you want something to drink.

Another way to maintain your Dry January experience is to track your progress. Try keeping a journal. Write down how you are feeling each day to monitor how you feel inside and out. You can even write about challenges you face during the month, and what you did to overcome them. Each day, give yourself credit for the days already behind you.

Another tool that you might find helpful is to replace one habit with another. For example, if you're the kind of person that likes to unwind at the end of the day with a glass of wine, you can replace that behavior with something else that is enjoyable to help you relax instead. This can be anything from practicing self-care at the end of the evening, to watching an episode of your favorite show, to starting a new craft project or hobby. This may also help you look at your sober month as a way of gaining something of value, instead of losing something.

Go Easy on Yourself

If you want to participate in a Dry January, but aren't sure if you can stick with the commitment, that's okay. Breaking a habit is tough work. It's okay if you can't make it the whole month without drinking or if you slip up now and then. The purpose of Dry January is to promote conscious drinking. So, if you're being mindful about when and why you're drinking, you're getting the hang of it.

Try not to be hard on yourself. Focus on your progress and not perfection. Some sober challenges allow you to participate at different levels of commitment where you can have a drink or two along the way, while others, such as Hello Sunday Morning, encourage people to restart their sober month if they end up consuming alcohol. Find a commitment level that works for you.

Either way, it's something worth cheering for.