If you're human, you've probably lied at one point or another. As odd as it sounds, lying is an important part of the way people in the world communicate. Have you ever thought about why people tell lies to begin with? The truth is, there's a psychology behind it.

People typically show some verbal signs or "tells" when they lie. You might notice a change in the tone of their voice or pick up on something that feels a bit off in the stories they tell. While there is not a surefire way to know exactly when someone is lying, there are things you can listen for that might raise some red flags.

7 Signs That Someone Is Lying

Some people have an instinct when someone they know is lying to them. Often they notice a change in the person's behavior or speech pattern. If you're not sure if you should trust that instinct, consider some of these common signs that someone is lying.

Keep in mind, however, that just because someone displays one of these signs does not mean that they are necessarily lying. But it can suggest that you may want to follow your instincts regarding the integrity of their statements.

They Use Filler Words

Sometimes lying takes some serious mental effort. It can cause people to speak in sentences that don't flow smoothly. As a result, their stories may not fully come together. In order to construct a lie, especially an elaborate one, a person might have to take frequent pauses to consider which words to use next and where they want the story to go.

Filler words, or word-fumbles, such as uh, er, like, and um often slip out during moments of hesitation. This is a way for a person to buy more time before they need to come up with whatever they are going to say next. However, just because a person says um does not mean that they are lying. These words are also called habit words because people often use them in sentences unconsciously.

One way to determine if filler words indicate lying is to compare the number of words used to a person's baseline. For example, if your friend usually says um a few times in a conversation, that may be their baseline. However, if they use the word um three times as much in conversation, it might be a sign that they are lying.

They Cut Out Contractions

In normal speech, contractions are used to shorten a sentence so you can get a point across quickly and clearly. Someone telling a fib might eliminate contractions when they talk and opt for using the full two words instead.

For example, using "was not" instead of "wasn't" makes a sentence come through more slowly. This may seem like an ordinary style of speaking, but it may actually be another effort to conceal a fib.

Similarly to filler words, cutting out contractions allows the person more time to process where they are going to take their lie next. The shorter their sentence is, the sooner they will have to respond with another answer. And, they might not have that answer don't the tip of their tongue just yet. They need to buy some time, and using more words in a sentence is a good chunk of currency.

In some cases, someone who is lying will pause frequently during conversations. Sure, it's normal for people to take pauses when they talk to catch their breath and keep their train of thought. However, people who are lying may pause for longer and respond more slowly than someone that is telling the truth. It gives them more time to think about what they will say next.

On the other hand, some people also have the ability to lie without needing to pause. For example, they may have rehearsed the lie ahead of time and knew exactly what they were going to say. If you have ever been around kids when a loud crashing occurs, you know the experience. You ask what happened and they have the perfect answer laid out for you.

However, some people find themselves caught in a lie in real-time, and need to pause to find a way out of it. So, if you ask someone a question and they say something like, "Well, I did go there but...I was only there for... a minute and...then I came home," you might find that you aren't getting a truthful answer.

They Repeat or Rephrase Questions

Another way for a person to buy time is to repeat things that they have been asked or things that you have already told them. For example, if you say, "I asked you not to go to the movies with your friends, so why did you?". Then, if they are stalling, they might say, "You absolutely did tell me to not go to the movies with my friends. I wasn't at the movies," they might be using that extra time to come up with a good excuse in their heads.

This is just one way of not giving you a straight answer. In addition, they might repeat the question back to you. For example, imagine you asked your friend why their car was on First Avenue that day. Then, they respond with, "My car was where? By First Avenue? My car?" they might be trying to buy time.

Some people might also ask you to repeat the question again. Even though you know they heard you the first time. These are additional tactics people who are lying might use to stall before responding.

Have you ever noticed that a person's voice seems to change when they tell a lie? Pay close attention to a rise or fall in the pitch of someone's voice the next time you suspect that they are lying.

Landmark studies have shown that it is actually common for a liar's voice pitch to change when they are fibbing. More specifically, people's voices tend to rise in pitch when they are lying compared to when they are telling the truth.

In these cases, a person might be feeling anxious that they could get caught in a lie. And, this heightened state might make their voice sound strained. This might be able to help you literally hear a lie when it's told to you.

They Deny and Get Defensive 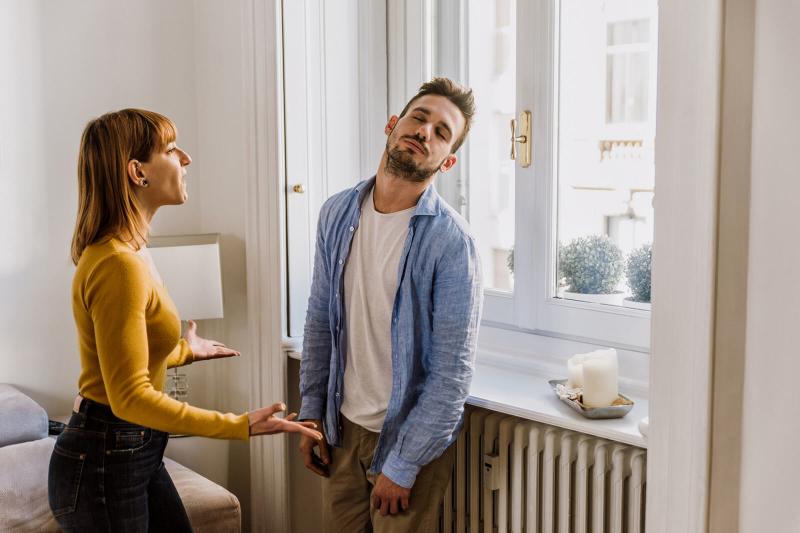 Someone who lies may also become verbally defensive if someone accuses them of lying. They may adamantly deny the accusation, or even try to make the other person feel guilty for calling them a liar.

For example, you might hear things like, "How could you think I would ever lie to you?" or "How dare you? You don't trust me?". Or, they might shut down.

When a truthful person is accused of telling a lie, they will most likely deny it but will give further information on the subject. On the other hand, someone who is really lying will most likely also deny it, but instead of offering more details, they get defensive.

They Change the Subject

Imagine this scenario: Your significant other spent the night out with friends, and they are telling you about how it went. They lead with their visit to a local bar and talk about catching a movie after. Then, they suddenly start talking about a doctor's appointment they have next week. This is an abrupt way to change the subject.

When a person changes the subject, it may be a means of distracting you from the lie. Maybe they have already told a lie and don't want you to ask further questions. Or, maybe they omit something from part of their story that comes later on, so they shift your attention to a different subject.

When you notice these changes, it might be a sign that you are not getting the whole truth. If you begin to feel suspicious, press on asking questions and looking for details that don't fit together.

Tips for Finding the Truth

It can be exceptionally difficult to tell if someone is lying to you for a variety of reasons. For one, someone may show some of the characteristics mentioned above, and they may just be a part of their personality or really just be a reflection of the way they speak.

However, if you suspect a person is lying, there are a few simple tips to keep in mind to help you get closer to the truth. The bottom line is that you deserve the truth, and hopefully, these tips will bring you one step closer to the information you need

How to Tell When Someone's Lying Is a Problem

While everyone occasionally tells white lies, some people make lying a bad habit, and may even develop a compulsive lying disorder. If you suspect that a loved one is experiencing a more serious form of lying behavior, there are treatments available to help them cope.

People have many reasons for lying, some good and some bad. They might be trying to protect themselves or gain respect from others. Or, they might be trying to control or manipulate a situation. It all depends on your relationship with this person that you think might be lying to you. At the end of the day, if you feel like you are being lied to, and it's bothering you, you should face the issue and talk it through so that you both can move forward.

Related & Popular
Meaningful Ways to Support Someone With Breast Cancer
By Aubrey Freitas
5 Types of Stressors and Simple Tips to Manage
By Aubrey Freitas
Spa Vacation for One
By Cheryl Cirelli
Free Printable Self-Esteem Game
By Paula H. Cookson LCSW
Coping Skills Worksheets for Adults
By Aubrey Freitas
Teen Stress Causes, Rates, and Ways to Help
By Marcelina Hardy, MSEd, BCC
10 Happiest Countries With the Lowest Stress Levels
By Aubrey Freitas
11 Medicines for Anger: Prescription and Over-the-Counter Options
By Aubrey Freitas
Stress Bumps on Fingers: Types, Causes and Treatment Options
By Nickie Harris-Ray
Managing Stress in Difficult Financial Times
By Aubrey Freitas
What Brain Chemicals Are Released When You're Angry?
By Tamsen Butler
Understanding Stress Related to Time Management
By Amber Tresca
9 Ways to Practice Stress Management Every Day
By Marcelina Hardy, MSEd, BCC
How to Manage Stress After Losing Your Job
By Mary Gormandy White
The Psychology of Lying
By Julie Kirk
Creative Anger Management Activities
By Leah Zitter
© 2022 LoveToKnow Media. All rights reserved.
How to Know When Someone Is Lying to You