Manual breaking of the water, or artificial rupture of the fetal membranes (AROM), is a common, routine procedure in obstetrics. Its main intentions are to induce the onset of labor or increase contractions and speed up spontaneous labor. AROM has a few benefits but also some risks. Get the facts about breaking water to induce labor.

Also referred to as an amniotomy or breaking the bag of waters, facts about artificial rupture of membranes include:

Reasons for the Breaking Water Procedure

The reasons for performing artificial rupture of membranes include the following:

At some point during labor if the amniotic sac is still intact, it has to be broken to progress through the second (pushing) stage of labor to get the baby out of the vagina.

To decrease the risk of cord prolapse during the procedure, the fetal head should be engaged in the pelvis and applied to the cervix. The amniotomy is done under sterile conditions to reduce the chance of introducing infection into the uterus. 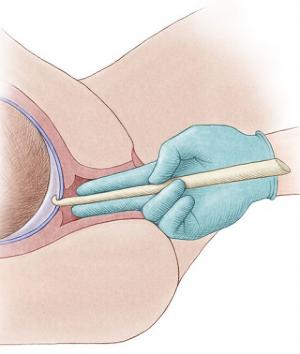 To break the bag of waters, many doctors use a sterile amniohook - a special instrument that resembles a long crotchet hook. Alternate tools include:

The Procedure for Your Doctor Breaking Water

During the procedure, the pregnant woman lies on her back in her labor bed with knees bent and legs frog-legged out to the sides. When using the amniohook, the doctor takes the following steps after preparing the patient:

As a result of the amniotomy, the amniotic fluid (the waters) pours out, and the baby's head might descend further. The procedure is easier if the bag of waters is bulging through the cervix.

Benefits of breaking the water include:

There are a few risks to an amniotomy, including:

Once the amniotic sac is broken, there is also an increased risk of maternal and fetal infection from vaginal bacteria if delivery is prolonged more than 24 hours.

Research on Amniotomy to Speed Labor

There is debate about whether AROM speeds up spontaneous labor. In a 2013 report of a Cochrane Systematic Review of research studies, based on the outcome of the 5,583 pregnancies the researchers found:

Based on the Cochrane Review and other data, the American College of Obstetricians and Gynecologists (ACOG) issued a Committee Opinion in February 2017. ACOG recommended against the routine use of amniotomy in low risk pregnancies where labor is progressing without problems. This opinion on artificially breaking the waters is part of ACOG's less-intervention-is-better recommendations.

The practice of AROM to try to speed labor is slow to change mainly because of its long tradition of easy and relatively safe use in obstetrics. Still, it is a valuable procedure when internal fetal heart rate or intrauterine pressure monitoring is needed or to check for passage of meconium by a fetus in distress.

Talk With Your OB Provider

When you talk about your birth plan with your OB doctor or midwife, include a discussion of the possible use of amniotomy during your childbirth. You will be more prepared to deal with the pros and cons if she/he recommends breaking your waters while you are in labor.

Related & Popular
True Labor Signs vs. False Labor Signs
By Karen Frazier
Childbirth Videos for Vaginal and C-Section Deliveries
By Dr. Vilma Ruddock
Pros and Cons of Giving Birth Standing Up
By Dr. Vilma Ruddock
How Long After the Water Breaks Before the Baby Is Born?
By Dr. Vilma Ruddock
Creating a Home Birth Plan (With Template)
By Mychelle Blake
How to Tell if Your Water Is Leaking
By Dr. Vilma Ruddock
4 Drugs Commonly Used to Induce Labor
By Julie Kirk
4 Types of Childbirth Options to Explore
By Jodee Redmond
Challenges to Expect When Birthing Multiples
By Dominique W. Brooks, M.D.
Explanation of Amniotic Fluid, Its Function, and Disorders
By Beth S, M.D.
Choosing a Contraction Timer
By Rachel Hanson
Great Techniques for Natural Childbirth Pain Management
By Jennifer Leavitt
Expert Info and Advice From a Certified Nurse Midwife
By Rachel Hanson
Pros and Cons of Birthing Centers
By Gabrielle Applebury
Does Induction Speed Up Labor?
By Dr. Vilma Ruddock
When and Why C-Section Births Are Necessary
By Dominique W. Brooks, M.D.
© 2022 LoveToKnow Media. All rights reserved.
Breaking the Water Artificially