The amount of caffeine in green tea often surprises folks who give up their java habit and switch to tea, thinking that a healthy beverage like tea won't make their hearts race or induce insomnia. Green tea contains approximately 50 milligrams of caffeine in an average eight-ounce cup, depending on the quality of the tea and how it's brewed. Yet green tea remains one of the best choices out of all caffeine-containing beverages.

How Green Tea Compares to Other Beverages

In order to understand how green tea compares with other beverages in terms of caffeine content, it's helpful to look at the facts.

Below is a handy chart to compare the caffeine content in green tea with other caffeinated drinks. All measures are for a standard eight-ounce serving.

Many people sensitive to caffeine report that green tea doesn't give them the jitters, shakes and insomnia often related to black tea, coffee, or cola. In fact, people often report feeling calm after sipping green tea. Why is the effect of caffeine in green tea different from that of other beverages? The answers lies in the chemical compositions of the tender young shoots harvested to make high-grade green tea.

Two compounds, L-theanine and Epigallocatechin gallate (ECGC), may mitigate the effects of the caffeine content of green tea, making it more palatable for those sensitive to caffeine. The health benefits of drinking green tea, like cancer prevention and cardiovascular health, may also outweigh the drawbacks of ingesting caffeine. These compounds stimulate the immune system, giving green tea its reputation as an anti-cancer agent. Naturopathic physicians and Chinese medicine practitioners prescribe tea to treat various ailments, and the Chinese have used tea medicinally for centuries.

L-Theanine (theanine), an amino acid found in green tea, promotes feelings of relaxation. As researchers study the effects of theanine, they are discovering that it works with many brain chemicals related to mood, including dopamine, serotonin, and GABA. Some laboratory studies suggest that theanine induces alpha waves in the brain, which are the hallmarks of a relaxed mental state. Because green tea contains an abundance of theanine, researchers speculate that the theanine counters the effect of caffeine and takes the edge off those caffeine jitters.

The second component in green tea that alters caffeine effects is EGCG. This miracle compound stimulates the body's immune system in a myriad of ways. Science Daily reports that EGCG may be effective in fighting bacterial sepsis, and often deadly bacterial infection. In addition to its powerful immune system activity, EGCG mitigates the caffeine content in green tea. As you brew a steaming cup of green tea and pour hot water over the tea leaves, evidence suggests that EGCG binds to caffeine and neutralizes its effects. 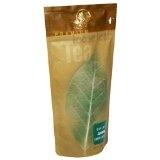 Some people are quite sensitive to caffeine, and drinking the recommended 14 to 16 ounces of green tea each day still makes them feel shaky or jittery. To minimize the caffeine in green tea, try the following:

If you're dependent on several cups of coffee to get through the day, consider switching at least one cup to green tea. From there, you may gradually shift the ratio, reaping the health benefits of green tea. If you're not used to sipping on coffee or tea of any kind, begin introducing tea to your life gradually. Also be aware that you may have to learn to like green tea, so don't just try one cup and stop; it can be an acquired taste. A drink with such a positive reputation is worth a try, and there are even ways to avoid the jitters if you're sensitive to caffeine.