Vitamin B12 is an essential vitamin for brain health and function. You'll find the vitamin in meat, fish, shellfish, and dairy products. It is also found in some cereals that are fortified with B12.

Consuming these cereals is the best way for some people, especially those who eat a plant-based diet, to get the recommended daily allowance of the vitamin. But not all cereals contain the same amount. So it is important to choose your cereal wisely.

Daily Recommended Allowances for Vitamin B12

Vitamin B12 helps with the production of red blood cells and DNA, it helps you to maintain a healthy nervous system, and helps prevents anemia. It also aids metabolism, controls homocysteine levels, and may reduce your risk of macular degeneration. If the human body has a vitamin B12 deficiency, tissues throughout the entire body are affected.

Cereals Fortified With Vitamin B12

You can find several different cereal brands on the market that are fortified with vitamin B12. The Food and Drug Administration (FDA) mandates the fortification of cereals. Just a few cereals to choose from listed by the United States Department of Agriculture (USDA) include:

When using vitamin B12 fortified cereals as part of your diet, always check the ingredients label, or the Nutritional Facts label, to make sure the cereal contains the active form of B12 known as cyanocobalamin or cobalamin.

Amount of Vitamin B12 in Fortified Cereals 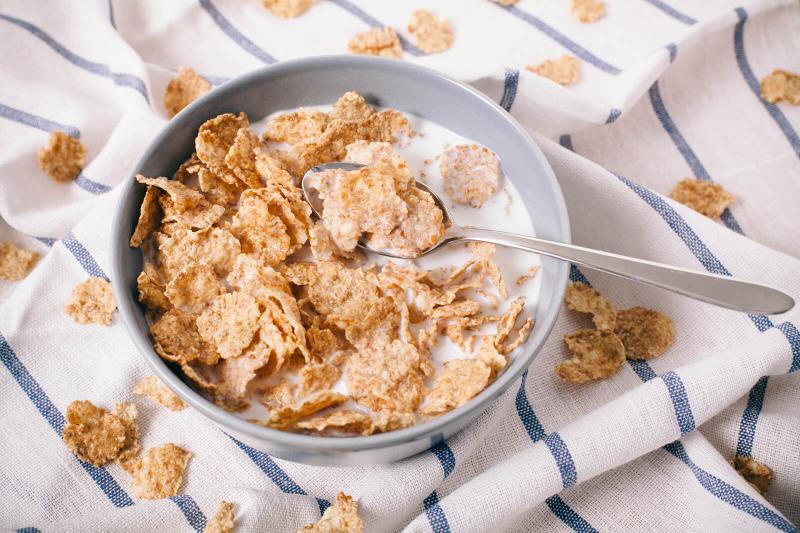 The amount of vitamin B12 added to cereals varies by product. However, you can typically find the information on the back of the box. The amounts listed in a few common cereals are:

One to two servings of many fortified cereal brands can easily meet the RDA for many age groups.

Health Benefits of Cereals Fortified With B12

For the general population, getting the recommended daily allowance helps your body maintain healthy blood and nerve cells. There are other widely promoted benefits of vitamin B12, such as improved energy, athletic performance, and endurance. But evidence to support these claims is lacking. But there are some groups that might gain specialized benefits from consuming cereals fortified with vitamin B12.

A bowl of breakfast cereal in the morning is a favorite of children everywhere. It is also an important source of vitamins and nutrients for them, especially for those young fussy eaters. Most kids do not care about nutritional needs or cereals fortified with essential nutrients.

However, vitamin B12 is important for cognitive function and brain development in children according to a 2016 study. By including daily servings of cereals and cereal products fortified with nutrients including vitamin B12, you help to ensure they are receiving the recommended dietary allowance (RDA).

Research has suggested that vitamin B12 is important for reducing the risk of a heart attack, cardiovascular disease, stroke, and dementia. Deficiency in older adults can also lead to irreversible nerve damage.

According to the Cleveland Clinic, high levels of homocysteine and low levels of vitamin B12, B6, and folic acid puts older individuals at a higher risk level for these debilitating events. Deficiencies can often occur in older individuals. A 2004 study (supported in part by the Kellogg company) suggested that fortified cereals were beneficial for older adults to lower homocysteine levels by raising vitamin levels. However, more recent independent research supporting those findings is lacking.

Since people on a vegan or vegetarian diets remove animal products from their diet, it is important to get a sufficient amount of vitamin B12 from other sources. Even though their diet is full of vegetables, fruits, legumes, and grains, it can be lacking in this vital nutrient. Certain plant-based foods may contain some vitamin B12 including:

Cereals containing vitamin B12 are a helpful way for individuals on a vegetarian or vegan diet to get the recommended daily allowance of B12.