Weight training burns a significant amount of calories, while at the same time building muscle. For this reason, weight training is popular with those who want to increase the size of their legs, arms and torsos. There are three free weight exercises that are the most popular and target these areas: squats, curls and presses. These three exercises can be done sequentially to create a challenging, compound exercise.

Squats are classic, multi-joint (knees and hips) exercises that target a variety of the body's muscle groups, with emphasis on the back and lower body. There are several variations of the squat, but the most common is the parallel back squat. This squat involves placing a barbell across the upper shoulders and back, squatting until the thighs are parallel to the floor, and returning to a standing position. Squats burn a tremendous amount of energy and activate the following muscle groups: 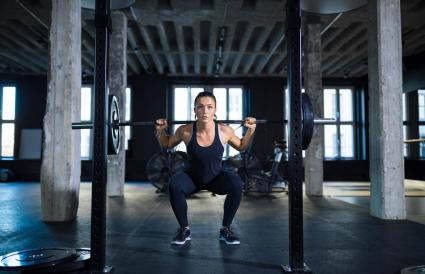 Many people don't think of the squat as a back exercise, but the erector spinae group of muscles in the back play a vital role in lateral stability while squatting. They contract isometrically (without shortening or lengthening) to control rotation of the torso.

The gluteus maximus muscle plays a vital role during squats. During the downward phase of the squat, the gluteus maximus contracts while lengthening. This allows the squatter to control the speed and range of descent. During the upward phase of the squat, the muscle contracts while shortening to transfer power to the quadriceps and hamstrings necessary to return to a standing position.

The quadriceps muscle group turns muscle activity into knee extension, which provides the motion necessary to perform squats. While in the downward motion of the squat, the quadriceps contract while lengthening, and contract while shortening when returning to the starting posture.

Curls are a classic weight lift that involves holding a weight in an upward facing palm at a dead hang and then raising the weight to the shoulder. This exercise is used to develop arm musculature and is utilizes these muscle groups: 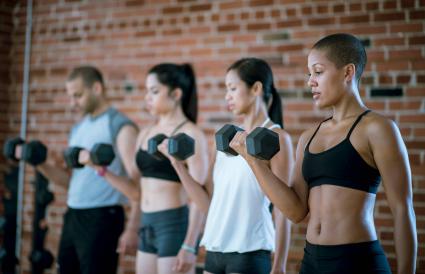 The goal of curls is to develop the biceps; therefore, it is logical that this is the primary muscle group used. The bicep muscles contract while shortening during the upward lifting phase of the exercise. The muscles contract while lengthening as the weight is being lowered back to the starting position. In this manner, they control the angle of the elbow, which controls arm movement.

The overhead press is typically the final movement in the squat-curl-press sequence. The weights are hoisted overhead until the arms are fully extended. Though this move primarily targets upper body muscles, core muscles are also recruited to stabilize the body while upright with weights overhead. 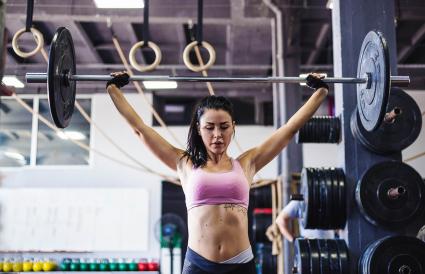 The triceps muscles provide upper arm extension and control during the lifting phase of the exercise as they contract while shortening.

The human body is a fascinating piece of machinery. An individual's ability to lift or control weight is dependent upon the angles of joints which are connected to rigid bones. It is the change of these angles that makes limbs move. These angles are controlled by gravity and muscles, which often oppose each other. By working out the muscles listed above, they grow stronger and can exert more force on these joints, which translates to more strength and an increased ability to lift heavier objects.