Low iron, also called iron deficiency anemia, may cause vague symptoms at first, making it hard to recognize there's a problem. Women are particularly susceptible to the condition. If you understand the early symptoms of low iron, you may help reduce your risk of severe complications.

Symptoms of Low Iron in Women

According to the Mayo Clinic, low iron happens when your body doesn't have enough iron to produce hemoglobin. Hemoglobin is a protein that gives red blood cells their color and helps carry oxygen through your body. If you lose a lot of blood or don't produce enough hemoglobin, your body doesn't get the oxygen it needs and symptoms may occur. However, early warning signs of low iron mimic other conditions and may be written off as being caused by stress, overwork, fatigue, or an unnamed virus. You may have no symptoms during the early stages of low iron or you may experience some of the following.

This is the most common symptom of low iron and possibly one of the least taken seriously. Fatigue is a symptom of many conditions, and with all the demands on your time, it may be the norm for you. When low iron first strikes, you may not realize you're more tired than usual. As the condition progresses, your fatigue will increase. It may be difficult to do everyday tasks. You might doze off often or sit more than usual.

Pale skin is skin that is lighter in color than normal. While some people are naturally fair-skinned, if your skin becomes obviously lighter and stays that way, your iron may be low. Pale skin occurs in iron deficiency anemia because there are fewer red blood cells in your body. Pale skin may involve your face or limbs. You may also notice paleness in your nail beds. When caused by anemia, it rarely resolves without treatment.

Weakness is another vague symptom of low iron. It may come and go. Your limbs may feel heavier than usual, and you may have less energy and desire to do physical tasks. When you attempt a strenuous job, you may have to stop and finish later. You may not complete exercise routines or do them with the usual intensity.

Dizziness is one of those symptoms relative to the person experiencing it. You may describe it as a spinning sensation while someone else describes it as lightheadedness. Either way, it's uncomfortable and can be a sign of low iron. Everyone gets dizzy now and then, so this is another symptom that's easily written off in the early stages of iron deficiency anemia. As things advance, episodes of dizziness will likely increase.

Low iron may cause panic attacks and hyperventilation, according to a 2013 study. No research exists on the frequency of these attacks due to low iron but, in theory, they may occur before anemia is severe. Just because you're anxious or you have a panic attack doesn't mean your iron is low. However, if you feel more anxious than usual or have a panic attack for the first time along with other low iron symptoms, you should call your doctor.

Irritability may be described as feeling agitated, angry, or short-tempered. According to Medline Plus, feeling grumpy is an early sign of low iron. Everyone gets irritable now and then, but if it becomes your new norm, low iron may be to blame.

If you find yourself in a brain fog more often than not, it may be due to something other than your busy schedule or hormonal changes. When your brain persistently doesn't get enough oxygen, it can't function at its peak. According to an article published in the Journal of Nutrition, iron deficiency affects cognitive function, especially as you age and your brain naturally has less iron stores.

This frustrating neurological condition causes an uncontrollable urge to move your legs, often at night. You may also experience itchy skin and creepy-crawly sensations. John Hopkins Medicine states on its website that, "The single most consistent finding and the strongest environmental risk factor associated with RLS is iron insufficiency." And you may not need to have severe iron deficiency to experience restless legs. One hypothesis is that you may still have iron deficiency in your tissues yet have normal blood iron levels. 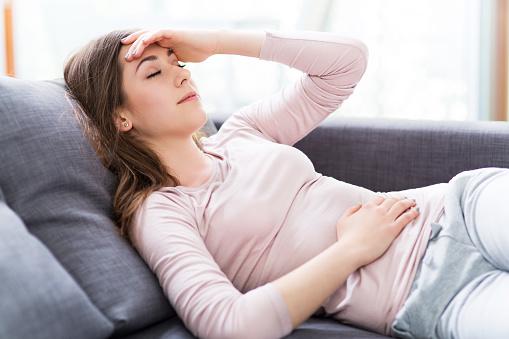 Headaches may occur anywhere on your head and be mild or severe. Easily mistaken as a sign of something else, such as stress or hormonal changes, they are an early symptom of low iron. They may occur on their own or with exercise or activity. Since headaches are common in many people, it's hard to diagnose low iron based on headaches alone. If they're persistent or not normal for you, you may have an iron issue.

At first, your low iron symptoms may be intermittent and not cause red flags. Alternatively, your body may respond to the lack of iron and adequate oxygen faster than someone else's, causing symptoms to escalate quickly. However, if low iron is left untreated, you'll eventually experience more severe symptoms of anemia which may require emergency care.

The National Heart, Lung, and Blood Institute indicates on its website that iron deficiency anemia is more common in women because of:

Women who are vegetarians may have low iron if they don't eat enough iron-rich foods. Gastric bypass surgery and gastrointestinal conditions such as Crohn's disease and Celiac disease may prevent your body from absorbing iron.

When to Call Your Doctor

If you have persistent symptoms of low iron, contact your doctor. They will discuss your symptoms and run blood tests to see if your iron is low. However, at least with restless legs syndrome, normal iron levels may not provide the entire picture. If your doctor isn't sure why you have low iron, they may order additional tests such as a fecal occult blood test to look for blood in your stool and imaging studies of your gastrointestinal tract or pelvis. These tests help rule out low iron caused by internal bleeding or a gastrointestinal or gynecological condition.

It's challenging to diagnose low iron in its early stages, since most symptoms are common to the stressors of daily life or hormonal changes. However, even if your symptoms are intermittent, it's important to get checked out as soon as possible. Early intervention may prevent larger problems. Many iron deficiencies are easily treated with iron supplements or diet changes. If you have one or more symptoms of low iron or feel something just isn't right, contact your doctor for an evaluation.