Big things are happening for both you and the baby during the fourth week of pregnancy, even though you may still be completely unaware that you are expecting. Since doctors count your pregnancy from the first day of your last menstrual cycle, your baby is actually only two weeks old when you are four weeks pregnant.

By the beginning of the fourth week in your cycle, the fertilized egg has become a blastocyst, or a ball of cells. This ball has traveled down your fallopian tube and is getting ready to make itself at home in your uterus. This process, called implantation, involves the blastocyst burrowing in to the lining of the uterus, and it will happen over the course of this week.

Implantation of the Blastocyst

According to the University of New South Wales, the process occurs in several stages:

As soon as it has made itself at home in your uterus, the blastocyst will begin to produce a hormone called "human chorionic gonadotropin" (hCG). This hormone will enter your bloodstream and will eventually reach concentrations high enough to be detected by a pregnancy test.

As the blastocyst implants itself in your uterus, you may or may not notice a few symptoms. Not everyone experiences these signs, and it's entirely possible that you will feel that nothing is different. 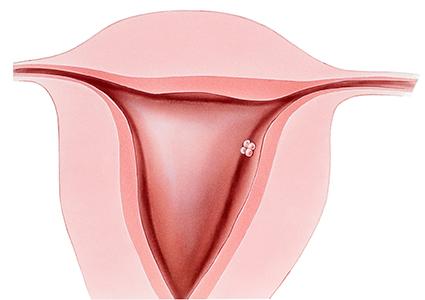 According to the Mayo Clinic, some women, perhaps as many as 30%, may experience light spotting, called implantation bleeding. This bleeding occurs a few days before you would expect your period, and it coincides with the blastocyst embedding itself in the lining of your uterus. As the blastocyst burrows in, it may displace some of the surrounding cells. Implantation does not happen to everyone, but here's how to know if it's happening to you:

Some women also report having cramps during the implantation phase of pregnancy. This feeling can be similar to light menstrual cramps, but it occurs a few days before you would normally get your period. On its own, this isn't a sign of pregnancy, but if you're also experiencing light spotting, it can further confirm your suspicions. However, if you notice severe cramping or bleeding, contact your doctor or midwife right away. This can be a sign of miscarriage or ectopic pregnancy.

More to Know About Week Four of Your Pregnancy

Whether or not you're experiencing symptoms, you may be able to test for pregnancy around the end of this week. Since the blastocyst begins to release hCG as soon as it implants, you can take an early pregnancy test to see if you can detect this hormone. Some early tests claim to be accurate up to four days before your period is due. However, if you receive a negative result with this test, don't worry. The hCG levels in your body will continue to rise, and you'll get a more accurate result after you've officially missed your period. 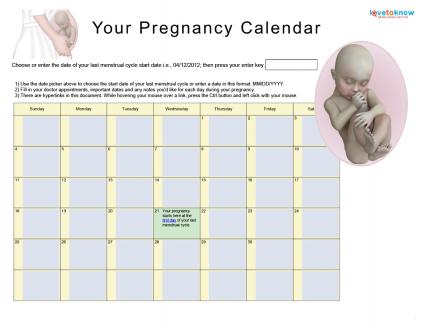 If you need help downloading the pregnancy calendar, check out these helpful tips.

While some women experience implantation bleeding and cramping, others don't have any sign that their lives may be about to change. Don't be concerned if you aren't noticing anything. Your body is changing in big ways, and soon your baby will make its presence known.