MRSA stands for Methicillin Resistant Staphylococcus aureus. This antibiotic-resistant bacteria has been associated with illegal tattoos.

Tattoos as a Risk for Infection

Skin infections from tattoos don't happen very often. Most tattoo artists in the U.S. take precautions to prevent infection, including sterilizing equipment, wearing gloves, and using new inks and needles for every customer.

However, infection risk increases every time skin is damaged - and tattoos involve making hundreds of tiny breaks in the skin. Luckily, most tattoos heal cleanly because the immune system fights off any bacteria that try to get in.

Occasionally, though, an infection does develop. Staphylococcus is a common culprit. This skin bacterium, also known as staph, causes many types of skin infections, not just those related to tattoos.

In recent years, a new type of Staphylococcus has developed. Called Methicillin Resistant Staphylococcus aureus (MRSA), this strain is resistant to many antibiotics. MRSA first appeared in hospitals, where frequent antibiotic use may have led ordinary staph to develop resistance, but a form of this infection has now begun causing infections in the general community. 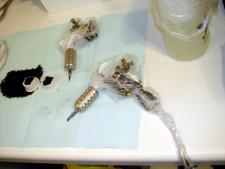 Most community acquired MRSA infections look like ordinary staph infections. *Cellulitis is a deep skin infection that can spread quickly or slowly. Skin is reddened, painful, swollen, and warm to the touch. IV antibiotics are often needed. MRSA can cause a cellulitis that spreads very quickly.

Community-acquired MRSA infections aren't always serious. But sometimes they are very dangerous, or even deadly. If cellulitis is spreading rapidly, it's vital to go to the emergency room right away. An untreated infection can migrate to the bloodstream or lungs, and it can also cause severe skin damage.Other serious MRSA infections include: 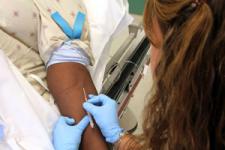 If you suspect you have MRSA, get medical help. For severe infections, go straight to the emergency room. Be sure to tell the doctor if you had a recent tattoo. If the tattoo artist was unlicensed, let the doctor know. Ask about MRSA: not all doctors will think of it right away, and correct treatment is important.

Treatment for MRSA may involve an intravenous antibiotic called Vancomycin. It's one of the few antibiotics that work against this bacteria. Other, newer drugs may also be used.

If your infection is minor and the doctor prescribes ordinary antibiotics, ask if he or she has considered MRSA. Remember, most skin infections are still caused by ordinary staph, and regular antibiotics will clear up the infection. You and your doctor may decide that you'll try standard antibiotics for a few days, and return to the office if they aren't helping.