Neils Clark has researched media and games for the last five years, and game addiction specifically since 2004. In addition to writing a book on game addiction, Neils has created a very well-rounded blog dedicated to making game addiction information accessible to gamers, parents, therapists, educators and developers. This site also aims to increase the quality and thoughtfulness of the information available.

What is gaming addiction?

Nobody knows, in my opinion. We've been listening to the same people for 10 years, using the same definitions that they made a decade ago. Most MMO games hadn't even been developed yet. And still, we've been copying and pasting this crap as though it's going to swoop in and save us all. It won't. The person who initially created it, Kimberly Young, has been criticized by John Grohol as having "all of the originality of a trash romance novel writer." Originally, Young "created" the criteria for her "internet addiction" by copying and pasting criteria for gambling addiction. In the last few years, as online games became bigger business, she again copied the same addiction criteria from gambling to online games.

So what's worse than not knowing what game addiction is? Pretending that you know, and taking action. In the last year we've had a few very well funded studies taking Young's bad definition, and using it on a massive scale. In massive telephone and internet surveys they see how many people are "addicted," despite a few fun facts.

By exposing people to bad numbers based on bad criteria, it sets regular folks up for confusion once smart analysis show up. It's especially bad when these numbers have the words Harvard and Stanford stamped on them. This press reflects badly on the brilliant people who attend these prestigious universities.

It's laziness on the part of researchers, and it wastes regular folks' time and energy. Most people don't have access to the actual fine print, and even those that do rarely have the time to look at every study. Researchers need to shift their priorities towards looking at the actual problem. I'm writing a book on it with my friend Shavaun. She's a therapist of 20 years, and while we both have professional and personal backgrounds in this, we're only two people. We're both working on this because it's something that has to be done, there's no big publisher or sack of cash. More researchers need to step up and really read the background literature. Too many researchers are copying off of the dumb kid's test. 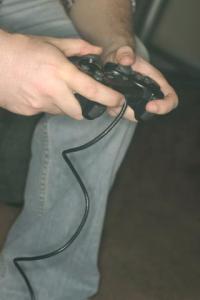 So where do we look? It might not actually be an addiction for a lot of the people involved. It's certainly not in the same class as drug use, since keyboards don't release methamphetamines and computer mice don't inject heroin. And that gets to the core of why a lot of gamers, researchers, even parents have rightly been upset with the use of the word "addictive." Games are a medium for creative expression, not opiates grown in Central America. That said, some people have had outrageous problems controlling themselves, myself included. Some of my largest inspirations for doing what I do come from the people that I've met while playing, people with stories too personal to discuss here.

So what is "game addiction?" Well, it's different for everybody who plays. A lot of people play in order to enjoy a game, and we have to start seeing that as completely legitimate. People who develop clinical dependencies (official addiction) will generally have psychological disorders, and that would ideally be where a health professional steps in. Still, behavioral addictions can develop in somebody who plays to excess for a long period of time. There's really no info yet on how to clinically diagnose someone who suffers from this. When we start from square one, we'll have more info, but for now jumping to conclusions can hurt people.

Addiction also has to do with the culture in and out of a game (watch for Florence Chee's upcoming thesis, and check out some of her recent work). Related to that, is something that I call "media experience," the idea that even in simple single player games (but especially in MMO games) we enter secondary worlds. We never physically leave the primary/real world, where we're sitting at the computer-though in many ways we experience secondary worlds very similarly to how we experience the primary/real life. These games don't just fool our senses and our sensibilities. They're more than that. They're the most recent incarnation of an artistic desire to, in the words of JRR Tolkien, "survey the depths of time and space."

How serious is this problem?

Again, how serious is gambling addiction among videogame players? Serious things are happening, but we really can't get an accurate sense of scale until we actually take games into account.

If you know you have a gaming addiction, what is the best course of action?

Some people can control themselves easily. They're lucky, and it generally comes to the fact that they can "self-monitor" well. Self-monitoring is kind of complex, and it's a subset of your everyday functionality. If you're doing fine personally, professionally and romantically- and if you're paying your bills, feeding the cat, feeding yourself and bathing more than twice monthly…you're functional. Good for you, you can probably keep from playing too much. We take some time to really clearly lay out functionality in the book.

Still, being functional doesn't always mean that you can monitor your gaming. Media experience, which I mentioned earlier, seems uniquely tailored for taking some people very much away from the real world. People call it "flow," or "sunk-time/sunk-cost," but those concepts don't fully capture what's going on in a game. Some people may not be as susceptible as others, but really there's no telling. Regular, functional people can get pulled in.

If you can control yourself past all that, then I'm jealous. Have fun playing.

Still, it's pretty common to see the big aggressive guy. His life is falling apart, but he'll fight tooth and nail to show you how "under control" his gaming is. People get defensive in a variety of ways, and it's hard to call. Sometimes a person will have a problem, and sometimes they just want to be able to game in peace. When we know what's actually happening, we'll be in a better place to call it. For now, insane interventions are a risky call. Even if someone does have a problem, pestering them can definitely serve to feed their beast.

If, like me, you can play until the sun comes up, then cold turkey may be the best option. It's easy to think that you can just play a little, and some single player games might allow you to do that easily. Some, not so much. MMO games are generally very difficult to play to moderation, ESPECIALLY for someone who has had any kind of problem in the past. In these games, "secondary world" and "media experience" take on entirely new dimensions. It's still secondary in the sense that you can be drawn in by your physical senses, but also secondary in the sense that you can enter into another layer of human culture. You've entered a city populated by people from different physical geographies. It's mind boggling.

Some people can limit their play, some people can't. If you can't, then my earnest recommendation is cold turkey.

That said, I fully intend to break my cold turkey from time to time. Games are an amazing art form, and with every bit of my soul I love them.

What should parents do if they think their child may have a gaming addiction?

Parents need to be both firm and involved, especially with younger children.

Many parents feel like they don't have the time to check in every now and again, and others feel powerless to stop too much gaming. In almost any case, you do have the power, and with that comes the responsibility to understand how your kids are playing. Some kids will respond to well-defined limitations, but some will need to be cut off when they don't respond to your reasonable limitations. What's a reasonable limitation? You are the parent. This doesn't mean that you should shut it down for fun. These games have been shown to be psychologically very positive for many kids, though very bad for others. Taking away a positive influence is like dropping them on their heads. Look at their play and take an active interest, then decide.

Do you have any tips for individuals who are recovering from a gaming addiction?

You're not alone. Some people play and love it, but some people honestly cannot control themselves. Both types of people deserve respect and compassion. Neither deserves to be laughed at.

Where can I learn more about game addiction?

The library. Email me if you want a list of my favorite books and studies.

Related & Popular
CBD vs THC: Differences in Properties, Benefits, and Effects
By Malia Frey
What Does Marijuana Smell Like?
By Aubrey Freitas
The Sober Curious Movement: What It Is and What It Means
By Malia Frey
Man Overboard: One Man's Struggle with Addiction
By Kelly Roper
Help in Overcoming Cocaine Addiction
By Kelli Dunham
How to Quit Smoking Weed
By Kathleen Esposito
Video Game Addiction
By Dana Hinders
Facts About Alcohol Poisoning
By Karen Frazier
Alcoholism Statistics
By John Ziemba
Drug and Alcohol Treatment Centers
By Marcelina Hardy, MSEd, BCC
Effects of Marijuana on the Brain
By Kathleen Esposito
Long Term Effects of Heroin
By Jodee Redmond
Defining When Your Drinking Has Become Alcoholism
By Gabrielle Applebury
Gambling Addiction Symptoms
By Kathleen Esposito
Effects of Using Crack Cocaine
By Lovetoknow
Heroin Use Pictures
By Lovetoknow
© 2022 LoveToKnow Media. All rights reserved.
Gaming Addiction