Smoking is the number one cause of lung cancer in the United States, according to the Centers for Disease Control and Prevention (CDC). More people die from lung cancer than any other cancers in the U. S. The more you smoke, the greater your risk.

The CDC reference notes tobacco smoke exposes your lungs to over 7,000 toxic chemicals such as formaldehyde and tar. Seventy of these substances are cancer-causing. In addition to lung cancer, smoking also causes many other cancers including in the mouth, throat, and bowel.

Most of the tobacco-related lung cancers are due to cigarettes. The CDC and the American Lung Association give the following statistics:

Risk of Lung Cancer From Other Types of Smoking 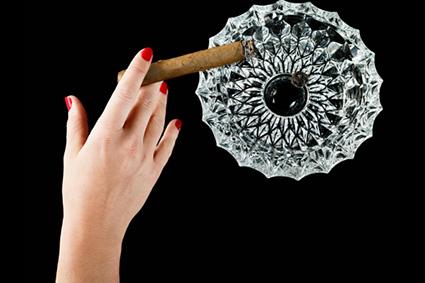 A study in the Journal of the National Cancer Institute in 2004 found smoking a pipe also causes lung cancer. However, the risk is lower than for cigarette smoking. This is also because pipe smokers tend to inhale little or no smoke. The risk is about the same or greater than for cigar smoking.

A 2013 study found long-term heavy marijuana smoking doubles the risk for lung cancer compared to non-pot smokers. Weed smoke exposes the lungs to many of the same toxins and cancer-causing chemicals that tobacco smoke produces, according to the American Lung Association. Pot smokers also tend inhale the smoke deeper and hold their breath longer thus prolonging exposure of the lungs to the harmful agents.

The vapor from electronic cigarettes, or e-cigarettes, or vapes, comes from liquid nicotine and flavorings that are heated by the device rather than from burning tobacco. Nevertheless, this vapor also has cancer-causing chemicals, including formaldehyde, that can attack lung tissue.

The levels of these toxic agents are said to be lower than in regular cigarettes, according to Johns Hopkins. More studies are needed to estimate the degree of risk of lung cancer from vaping.

According to the World Health Organization, smoking water pipes or hookahs are also dangerous to health. These devices carry a significant risk for causing lung cancer.

The Effect of Quitting Smoking

People who give up smoking decrease their risk of lung cancer even after years of smoking. The risk will still be higher than someone who never smoked but quitting can make a significant impact on your chance of getting lung cancer.

The younger you are when you quit, the more you decrease your risk of dying from lung cancer, according to another National Cancer Institute fact sheet. In addition, people who quit smoking after a diagnosis of lung cancer do better with treatment and have a lower recurrence and better survival rates than those who continue to smoke.

Smoking can be hard to quit because the nicotine in tobacco is highly addictive. However, people should make a major effort to stop because of the high risk of lung and other cancers and various diseases. If you smoke, talk to your doctor about strategies to help you give up the unhealthy habit.

Related & Popular
CBD vs THC: Differences in Properties, Benefits, and Effects
By Malia Frey
What Does Marijuana Smell Like?
By Aubrey Freitas
The Sober Curious Movement: What It Is and What It Means
By Malia Frey
Man Overboard: One Man's Struggle with Addiction
By Kelly Roper
Help in Overcoming Cocaine Addiction
By Kelli Dunham
How to Quit Smoking Weed
By Kathleen Esposito
Video Game Addiction
By Dana Hinders
Facts About Alcohol Poisoning
By Karen Frazier
Alcoholism Statistics
By John Ziemba
Drug and Alcohol Treatment Centers
By Marcelina Hardy, MSEd, BCC
Effects of Marijuana on the Brain
By Kathleen Esposito
Long Term Effects of Heroin
By Jodee Redmond
Defining When Your Drinking Has Become Alcoholism
By Gabrielle Applebury
Gambling Addiction Symptoms
By Kathleen Esposito
Effects of Using Crack Cocaine
By Lovetoknow
Heroin Use Pictures
By Lovetoknow
© 2022 LoveToKnow Media. All rights reserved.
Smoking and Lung Cancer