Electrolyte-enhanced beverages can be helpful when you're sick or dehydrated, but it can be difficult to tell which option is best for your situation. Because Gatorade and vitaminwater® look and taste similarly, you may be wondering which one is better for you or if it really makes a difference which you choose.

It turns out there are significant differences in sugar, potassium, and other nutritional details that can make it better for you to choose the right drink for your specific circumstances. Both of these drinks can be beneficial in certain situations, but knowing more about Gatorade and vitaminwater can help you pick the best option to meet your individualized needs. 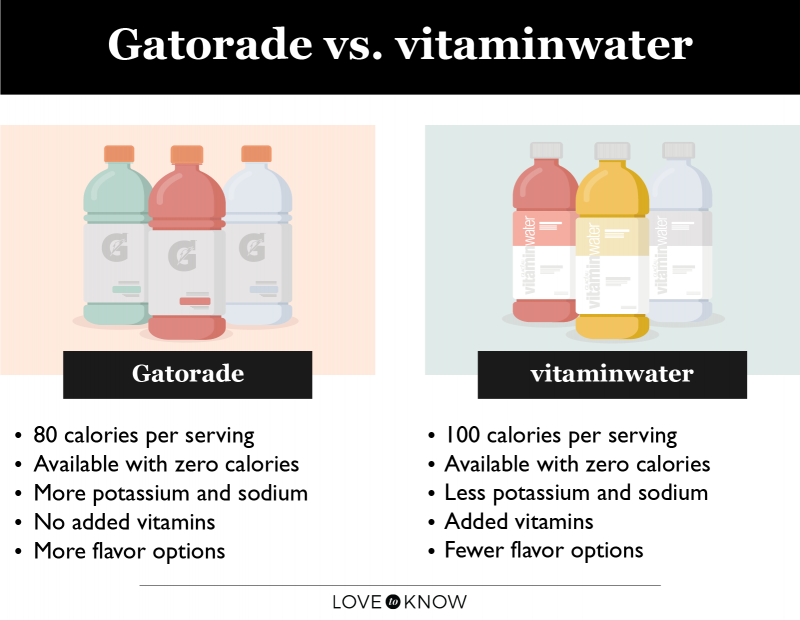 The chart below compares four types of energy drinks in similar flavors, all using a 12-fluid ounce serving. You'll see the nutritional differences between the original formulas, as well as Gatorade Zero vs. vitaminwater zero. Specifically, the varieties and flavors compared are Gatorade Original Fruit Punch, Gatorade Zero Fruit Punch, vitaminwater revive (a fruit punch flavor), and vitaminwater revive zero. All nutrition information is sourced from the product labels.

Similarities Between Gatorade and vitaminwater

Even though they aren't the same, Gatorade and vitaminwater have a number of things in common:

Differences Between Gatorade and vitaminwater

There are several differences between Gatorade and vitaminwater, and some are quite important. If you're choosing the right sport drink for your situation, keep these differences in mind.

Consider the micronutrient content of these drinks. Potassium and sodium are electrolytes, necessary elements for helping your body stay healthy and properly hydrated.

Gatorade is an electrolyte drink, providing sodium and potassium, but not significant amounts of other essential minerals and vitamins. While some flavors of vitaminwater provide potassium, others do not. On the other hand, vitaminwater is fortified with a variety of essential vitamins and minerals, especially B vitamins.

Type and Amount of Sugar

When comparing vitaminwater vs. Gatorade, sugar is another important consideration. Regular vitaminwater has more sugar that regular Gatorade, which is good to know if you're watching sugar in your diet.

The type of sugar also varies. Gatorade uses a combination of sugar and dextrose, while vitaminwater uses fructose and sugar.

Both Gatorade and vitaminwater offer lower-calorie (or calorie-free) alternatives for times you want to cut calories and reduce added sugar intake. In addition to Gatorade Zero, Gatorade offers a product called G2, which contains just 35 calories per serving. Regular Gatorade is slightly lower in calories than regular vitaminwater.

Vitaminwater zero is calorie-free but provides the same amount of essential micronutrients as the original vitaminwater version.

When it comes to flavor variety, Gatorade has quite a few more options than vitaminwater:

Gatorade vs. vitaminwater for Various Uses

Because Gatorade and vitaminwater are so similar, these two drinks share many of the same pros and cons. Still, some of the these pros and cons will vary based on your specific situation.

When You Need an Energy Boost

One pro is that these two drinks may help boost energy and provide you with essential nutrients. Gatorade is a source of electrolytes, sodium and potassium, and Vitamin Water provides a more extensive list of vitamins and minerals. One flavor of vitamin water has caffeine.

When You're Watching Your Weight

Both drinks are a source of carbohydrates, which can give you quick energy. However, it's important to keep carbohydrate content in mind if you are watching your weight or have a health condition like diabetes. Regular Gatorade and vitaminwater contain added sugar, which can contribute to unwanted weight gain when consumed in excess.

Gatorade Zero and vitaminwater zero do not contain added sugar or carbohydrates, so they may be a better choice if you're working to maintain a healthy diet.

If you're sick and are losing fluids through vomiting or diarrhea, an electrolyte drink like Gatorade or vitaminwater may help hydrate you. However, the CDC recommends that the average person use plain water instead of sports drinks to rehydrate when sick. If you know you are low on potassium due to dehydration, Gatorade may be a better choice than vitaminwater because it has a much higher potassium content. However, you should always talk to a doctor if you suspect you are very dehydrated.

When You Have a Hangover

If you overindulged in alcohol and are dehydrated, it's natural to wonder whether to choose vitaminwater or Gatorade for a hangover. Like rehydrating when you're sick, getting fluids after a bout of drinking is important. A review of the literature in 2019 found that electrolyte levels became unbalanced after significant alcohol consumption. This doesn't mean that an electrolyte-rich drink will help more than water, but if you feel like trying it, Gatorade has a higher content of electrolytes than vitaminwater.

How to Choose a Sports Drink

It might be difficult to determine whether to choose Gatorade or vitaminwater, as these two drinks are very similar. The bottom line is to select something that fits your individualized needs, taste preference, and weight management goals, as well as any specific situations you may have.