Ab belts are ubiquitously advertised as a great way to firm up your abs as you go about your daily routine. But do they really work, or are they merely hype that preys on the hopes of those who are looking for an easy way to get fit?

What Are Ab Belts?

There are a number of ab belts on the market today that claim to allow users to slim down without even breaking a sweat. How? According to most ab belt manufacturers, users put the ab belt around their middle (or other muscle groups they'd like to tone) for ten minutes and the belt does the work. The claim is that electrical stimulation causes the muscles to contract, achieving the same result as hundreds of sit-ups. Best of all, according to the manufacturers, you can wear the ab belt anywhere as a quick fix to a flabby body.

The belts are marketed under a large number of brands. Typically, the belt looks something like a cummerbund that is powered by a lithium battery. Some come with some kind of toning gel that comes with it, which reportedly maximizes results achieved with the device.

There are so many ab belts available for purchase - some of which definitely stand out from others in terms of reported effectiveness and consumer reviews.

The only ab belt approved by the FDA specifically for the strengthening of abdominal muscles, the Slendertone Flex receives largely positive reviews from Amazon customers. A review by Dr. Bill Sukala states that this belt (and others) may be effective in temporarily toning ab muscles, but should not be considered a miracle product that will help the user lose fat or look anything like the models in the advertisements. A Slendertone costs around $120. 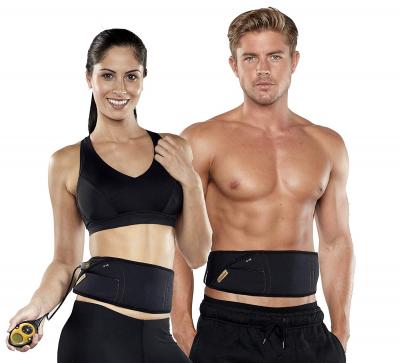 Ads on television made the Contour Ab Belt a recognizable piece of exercise equipment and compelled many people to open their wallets. Contour ab belts are accompanied by a calorie-restriction diet plan, and since most fitness professionals agree that losing fat around the abs has more to do with diet than with exercise, it's no wonder some customers report results. The belts cost just under $200.

Listed as one of the best ab belts by PowerLiftingBelts.org, the Easy Body Shredder has mixed reviews on Amazon where some customers swear by its effectiveness and others are upset because the unit breaks easily. When compared to other ab belts, the Easy Body Shredder is comparable, yet stands out since it can be used on others body parts beyond the abs. This belt can be purchased for under $100. 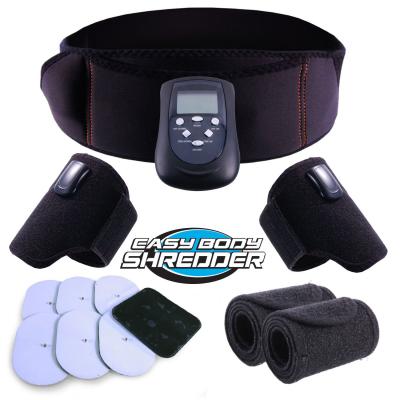 Are the Manufacturers' Claims True?

Are the ab belt manufacturers' claims too good to be true? Sadly, yes. While ab belts are based on muscle stimulators that do cause muscle stimulation and contraction, achieving the phenomenal results touted by the manufacturers of ab belts would require more power, more time - and a lot more pain. It is possible to tone up muscles with muscle stimulation. However, these types of results require a high amplitude, strong stimulus and long duration. In other words, you could get benefits, but it would take longer and hurt more than just doing the exercises.

A 2014 University of Wisconsin thesis study reported stronger core muscles for study participants using neuromuscular electrical stimulation for five weeks. Research published in the Journal of Sports Science & Medicine stated participants in an 8-week study reported feeling as though their midsections were more toned after dedicated use of self-administered neuromuscular electrical stimulation.

In 2002, the FTC filed false advertising complaints against the manufacturers of ab belts, stating that AB Energizer, AbTronic and Fast Abs device manufacturers were selling false hope, not real solutions. Among the false claims:

The FDA has indeed cleared electrical stimulators for use, but primarily in medicinal settings for muscle relaxation under the guidance of a medical professional. The Slendertone Flex is the only ab belt approved by the FDA for purposes of ab muscle toning, strengthening, and firming.

According to the FDA, the ab belts may not just be worthless, they could be harmful. The device was never approved by the FDA and are actually associated with a host of potentially harmful side effects, including:

The FTC included charges against the three manufacturers that they not only claimed that the product was completely safe, but that they failed to warn consumers about the true risks of ab belts, including those listed above.

The Truth About Toning Your Abs

The truth is, there is no quick, sweat-free, easy fix to chubby abdominals. Many factors come into play in the appearance of your abdominals including genetics, water retention, diet, body fat and muscle tone. You have control over some of these factors. Others may be overcome by hard work.

Getting a "six-pack" of rock hard abdominals takes a combination of diet and exercise. But even lowering body fat may not cause your six-pack to pop out. In some people, especially women who are hormonally predisposed to extra adipose in the belly region, one must achieve an extremely low body fat percentage before the six-pack shows.

In order to make your abdominals the best they can be, maintain a healthy body-fat percentage through diet and exercise and perform exercises that strengthen the muscles of your abdominal region.

There is no quick fix for flabby abdominals. Any manufacturers of products that claim a quick, easy, painless and sedentary way to tone up your muscles are only looking to help you lose fat in one region - your wallet. Steer clear unless you're only looking to part with cash - not belly fat.