Some types of birthmarks are genetically passed from one generation to the next. However, strawberry birthmarks on babies are not genetic in nature.

Which Babies Are at Risk for Strawberry Birthmarks?

Strawberry birthmarks are not hereditary, but they are linked to a short list of risk factors. Also known as infantile haemangiomas or strawberry naevi, these birthmarks are much more likely to be found on premature infants rather than babies who are born at term. In a recent study conducted at the Medical College of Wisconsin, researchers showed low birth weight to be the most significant factor related to a baby developing a strawberry birthmark patch. Previous to these findings, common risk factors included:

The reason infantile haemangiomas are referred to as "strawberry" birthmarks is their raised, bright red surface. The unusual thing is that babies aren't actually born with these marks. Instead, they usually show up within the first week to a month following birth. These strawberry patches will continue to grow for another 3 - 6 months, and then in most cases will gradually diminish. However, they don't go away overnight. It takes years for them to totally fade. 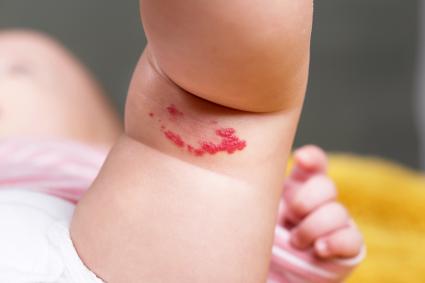 In most cases strawberry birthmarks fade:

Don't take such nonsense to heart. Experts think these birthmarks may be linked to an imbalance in the development of blood vessels which is probably related to premature births and low birth weights. If you're still feeling guilty, go back and take a look at the risk factors. None of them can be controlled by the parent. It's not like you can give up the fact that you're carrying a female baby or that you can change the color of your baby's skin.

While you may not be thrilled with the looks of a red birthmark, you can rest assured that a strawberry birthmark doesn't hurt your baby. With a small exception, nothing needs to be done to treat them. Around one in a hundred ever need any kind of medical treatment.

Talk With Your Pediatrician

If you have concerns about your child's birthmark, don't hesitate to talk with your pediatrician. These birthmarks are usually pretty harmless most of the time with the main concern being their appearance. However, your doctor may call for x-rays to put your mind to rest and check the extent of the birthmark and whether any other treatment is necessary.