All births are amazing stories to tell. Bringing a human into the world is epic, regardless of the circumstances surrounding the event. Sometimes, there is no tale more dramatic than the unexpected arrival of an infant. While prematurity is often shrouded in fear, doubt, and uncertainty, these success stories are simultaneously packed with elements of strength and inspiration.

Below are two heartfelt premature birth success stories that two strong moms were willing to share. Their experiences and words remind parents that sometimes the littlest humans end up being the strongest ones.

Kim learned she had complications during her pregnancy on Valentine's Day in 2002. Excited for her doctor's appointment, where she expected to learn the gender of her child, her joy quickly turned to fear. Kim's blood pressure was too high, and she was sent to Labor and Delivery to meet with a High-Risk Labor and Delivery doctor.

Four weeks after her initial diagnosis, at 28 weeks gestation, Kim's son was delivered weighing 1 pound 14 ounces and stretching a mere 12 inches long. He struggled with breathing, a common hurdle for preemies, and faced other complications and challenges attributed to his early delivery. His parents gifted him with the strong name David to help him prepare for his upcoming fight against Goliath.

Doctors worked around the clock following his birth to remedy David's many complications, including his sensitivity to touch and a heart defect. He was put on a ventilator to assist him in his breathing, not something little David enjoyed, to say the least. It was a common occurrence for David to pull the ventilator from his mouth.

David proved himself a fighter. He steadily grew but caught numerous infections while in the NICU. He was repeatedly placed in isolation, requiring everyone who worked with him to wear gowns and gloves. He struggled with feeding, another common hurdle for many preemie babies, and eventually received a feeding tube so he could receive the vital nutrients his body so depended on.

After four months of NICU life and six surgeries, David went home to a lot of therapy but also to a lot of love and support.

Kim shares some of the emotions she went through in those initial years of David's life. "It took four years of therapy to get David to accept food by mouth, and it's priceless now to see him eat! We reflect back to seeing him take his first step the day before his second birthday. It was an answer to our prayers as we wondered if he would need a walker or additional assistance, just a day shy of the appointment to have additional testing on his legs and muscles. It's a long journey but one that was worth every moment. We are blessed now with David being a fun-loving child! He runs and plays and enjoys life to the fullest. We do have some reminders; as we see his surgical scars, or are reminded of his hearing loss, or as we have to remember that it sometimes takes David a little longer to learn new tasks at school. But there's no stopping this precious boy from becoming anything his heart desires." 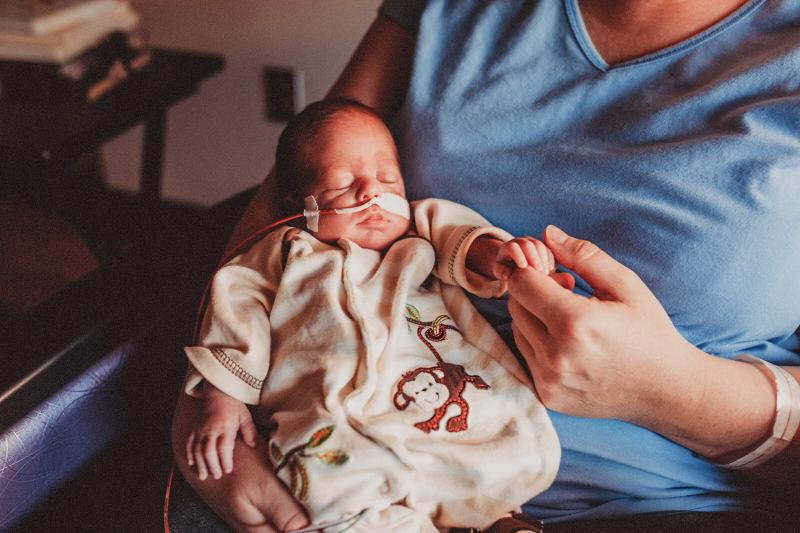 Barb had a miscarriage in 1998, and after medical assessment, she was diagnosed with an incompetent cervix. Should she become pregnant again, her cervix would need to be stitched shut until she was ready to deliver. When she got pregnant once more, everything proceeded normally, with no complications. All was going according to plan.

The hospital they went to did not have a neonatal unit, so Barb was transferred to another hospital 40 minutes away. At the new hospital, the OB/GYN on duty stressed that he wanted to postpone delivery as long as possible for the baby's benefit, but because of concerns that had since been revealed, premature delivery might be imminent. The amniotic fluid was low, and the baby's activity had decreased significantly. Barb and her husband waited with bated breath to see what would transpire next.

On Sunday afternoon, it became obvious that the baby had to be delivered immediately. From this point on, everything moved at a rapid speed.

"I can still remember the nurse placing our little boy on the table with me, all swaddled up in a receiving blanket," said Barb. "I reached out and touched his tiny lips and said, "My little trooper!" It was a very brief meeting, as he was soon taken to the Neonatal Unit. Our son weighed four pounds, 14 and a half ounces, and was 18 inches long."

Their son was eight weeks premature but doing very well. He had jaundice and naturally needed to spend some time in an incubator. His lungs were adequately developed, and he was breathing on his own. Unfortunately, they soon determined he had sleep apnea, which required constant monitoring when he slept for the next six months.

Barb was able to hold her son the next day, and he only spent 17 days in the NICU. However, breastfeeding was not easy, so she pumped breast milk until he could latch on and feed from Barb's body.

His pediatrician watched him for several months while he hit many growth milestones.

Barb said, "One thing he told us, which we will never forget, is that a healthy preemie will more than make up for lost time, and when they are hungry, we will know. Breastfeeding continued for the first six weeks, but then we switched to formula. Our son had difficulty with regular formula and projectile vomiting, so he had to be switched to soy formula for a while. However, once he started eating and switched to regular milk, his growth became phenomenal, eventually scoring in upper percentiles for his height and weight. Today, we boast a six foot-tall 18-year-old, who will always be referred to as our "Little Trooper."

Premature infants are sometimes born small, and they enter the world fighting great battles, but this doesn't mean they are weak in spirit, not by a long shot. These little ones embody the strength and tenacity it takes to endure great challenges. While they may be tiny, they most certainly are mighty.

Related & Popular
What to Expect if You're Pregnant While Breastfeeding
By Abby McCoy, RN, BSN
What to Do When a Toddler Complains of Back Pain
By Dr. Vilma Ruddock
Reasons for Newborn Skin Color Changes
By Melanie Stumbaugh
Breastfeeding Advice for Women With Breast Reduction Surgery
By Dominique W. Brooks, M.D.
Recognizing Child Abuse Signs at All Ages
By Karen Frazier
5 Toddler Constipation Remedies
By Susie McGee
Elements of a Healthy Breastfeeding Diet
By Elise Deming, RDN
Breastfeeding Older Children and Weaning When Ready
By Myrrh Hector
Understanding Jaundice in Babies
By Janine Kelbach, RN
Top Newborn Care Tips to Help You Through the First Few Weeks
By Susie McGee
Baby Ear Infection Symptoms and Treatments
By Janelle T King, MPH, BSN, RN
Handy Printable Toddler Development Checklist
By Michele Meleen
Essential Potty Training Guidebook
By Crystal Schwanke
Causes of Infant Bad Breath and When to Worry
By Janelle T King, MPH, BSN, RN
What to Expect From a Baby Born at 29 Weeks
By Julie Kirk
Why Does My Baby Vomit Everything She Eats?
By Lynsey Keep, RN
© 2022 LoveToKnow Media. All rights reserved.
Inspiring Premature Birth Success Stories: Holding Hope