Implantation bleeding, occurring during the second half of your menstrual cycle, is usually of short duration. For a few women, it might continue longer, lasting even up to the time of the next expected period. How long implantation bleeding lasts can vary. Know what to look out for and when to consult your doctor to rule out other problems.

According to a 2009 Global Library Of Women's Medicine (GLOWN) review, the process of implantation:

This means if your menstrual cycle is the average 28 days long, your implantation bleeding could occur anywhere between day 20 or 21 up and days 26 to 28.

Other Characteristics of Implantation Bleeding

The timing of bleeding in the second half of your menstrual cycle, the subsequent onset of early pregnancy signs and symptoms, and other characteristics give you clues to the possibility that this is implantation bleeding:

Implantation bleeding does not occur in all women, and each person can experience different characteristics. Some women might mistake the bleeding for their period, and others barely notice the scant spotting.

The Cause of Implantation Bleeding

The lining of your uterus (the endometrium) develops each cycle to accept and nurture an embryo. Numerous small blood vessels supply the tissue of the endometrium. During implantation, bleeding can occur when the embryo disrupts the endometrium and these vessels that will supply blood and nutrients to the early pregnancy.

A fertilized egg travels from the fallopian tube and reaches the uterus by about three to four days after fertilization. According to the 2009 GLOWN review cited above, implantation begins about three days later.

So by day six to seven after fertilization, the early embryo (blastocyst stage):

The process of implantation establishes a connection between the developing embryo and the mother's circulation that will last until delivery of the baby. 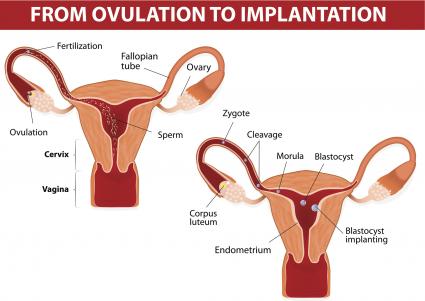 What to Keep in Mind

Bleeding during implantation does not signify an abnormal pregnancy. However, other problems such as an ectopic or other abnormal pregnancy, can cause irregular vaginal bleeding in the first trimester. Consult your doctor if you are concerned or have any bleeding that is:

It is especially important to talk with your doctor if you have significant pelvic cramps or pain with any type of bleeding pattern, even if you don't have symptoms or signs of pregnancy.

Implantation bleeding is usually of short duration and is part of the normal process of establishing a pregnancy when the embryo arrives in the uterus. If you notice this type of bleeding, do a home pregnancy test and talk with your doctor about the next steps to take to ensure you have a healthy pregnancy and enroll in prenatal care.