How long marijuana stays in your system depends on a variety of factors. How often you smoke, your rate of metabolism, and your general health and weight all have an effect on how long it takes before marijuana is out of your system.

According to the experts at WebMD, the amount of time marijuana stays in your system is anywhere from a week to a month, depending on how often you use it and a number of other variables.

Factors That Affect How Long Weed Is Detectable

Depending on your pot habit and other factors, evidence of marijuana (cannabis) can be detected in your body systems anywhere from a few days to several weeks after your last use of the drug.

According to the National Institute on Drug Abuse, the amount of THC (tetrahydrocannabinol) in the marijuana you smoke could be a factor in how long the drug remains in your body.

The drug potency depends on the potency of the THC. This is the chemical combination that is found in the cannabis plant, otherwise known as marijuana. THC is also the chemical that causes the behavioral effects of marijuana that produce the "high" users feel and is the main active ingredient. When THC goes into your system, it is quickly absorbed in the fatty tissues of various organs.

Marijuana's potency has increased significantly in the last few decades.

How Often You Smoke

How often you use weed and how long you've been using it also affects how quickly your liver can metabolize the pot load and get rid of it. The Drug Court Institute states THC metabolites are stored in your fat cells in your body. The more often you smoke, the more THC builds up in your system, and the longer it takes for those metabolites to break down.

How much pot you smoke or ingest and therefore how long it takes for your body to metabolize that quantity and excrete it will affect how quickly it leaves your system.

The route by which you use the drug also plays a role; pot gets into your blood and body quicker from smoking it than from ingesting the same amount.

Your general health, weight, and metabolism can play a part in the amount of time it takes the chemicals to leave your system. If you weigh a lot because of increased body fat, more marijuana chemicals will accumulate and persist longer in your body because of storage in your fat. Drug tests don't look for the THC in your urine. They look for the metabolite that is resultant of your body breaking down the THC in your fat cells, 9-carboxy-THC. If your body weight is high because of a high amount of body fat, this could prolong how long THC stays in your system.

The longer your body takes to process weed, the longer it takes for the evidence to disappear from your system. Health problems, such as liver or kidney disease, can slow the metabolism and excretion of marijuana. 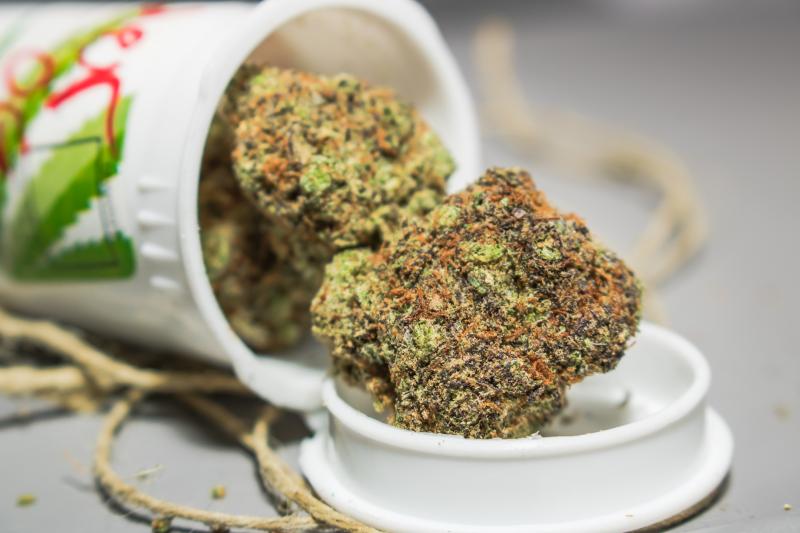 The higher the potency of your weed, the bigger the amount, and the more often you use it, the longer it takes the drug to go from absorption to excretion. Understanding how long marijuana stays in your body fluids and tissues also rests on knowing how your body absorbs, distributes, metabolizes, and excretes it.

Absorption in Your Blood

Based on a 2007 review of studies in Chemical Biodiversity, marijuana chemicals get into your blood and brain within seconds after smoking a joint, and the high is immediate. The following duration of marijuana in your blood is possible:

Absorption into your blood and therefore elimination is slower if you take weed by mouth, such as in food or as a tea. The higher the dose of THC smoked or ingested, the longer it can be detected in your blood.

Distribution in Your Body Tissues

According to the Chemical Biodiversity article cited above and an extensive review in the Iranian Journal of Psychiatry, following absorption into blood:

It is important to know if you are a regular or heavy user of pot, fat stores can potentially redistribute THC and its metabolites to your other body sites. This can lead to detection of marijuana use in your blood and especially your urine long after you stop using weed. The more body fat you have and the more you abuse grass, the more this can occur.

Metabolism in Your Liver

Your liver is the main site of the rapid metabolism of marijuana into several compounds. If your liver metabolism is slow, this will prolong marijuana in your system. According to a study in the Journal of Analytic Toxicology, after smoking a joint, THC metabolizes into its two major by-products:

These metabolites are excreted from your body over time depending on the pattern of your pot use. Variations in the rate of liver metabolism and other processes is one factor that accounts for differences in the duration of marijuana in the body among people.

Excretion of THC and Metabolites

The amount of pot you use is excreted mainly in your stool and a lesser percentage in your urine. Other elimination sites for THC and its metabolites include saliva and sweat.

Based on a 2000 review in the journal Acta Clinica Belgica, marijuana metabolites are measurable in your urine for days to months, depending on how much you smoke and how much fat your body has:

How Long the Effects of Marijuana Last

When people smoke pot, the euphoria, relaxation, and other effects last from one to three hours, according to the National Institute on Drug Abuse (NIDA). The high starts soon after absorption of pot into blood and brain and continues until the THC blood level is low.

The onset of euphoria and other effects is delayed by 30 minutes to an hour when people ingest the drug, and it lasts longer. Whether smoked or ingested, the effects of marijuana and their duration vary from person to person and are more pronounced:

The presence of a significant of THC level in blood is an indication a user is still intoxicated.

Some weed users try to speed up absorption of THC to get a quicker high. Smokers try to do this by taking quicker and deeper puffs or holding in the smoke in the throat and lungs. Because the absorption is slower, a user who takes marijuana in the form of food or drink might mistakenly consume a bigger dose in an effort to speed up the hit.

After the High Wears Off

After your high wears off in one to three hours, a low level of THC might still be in your blood. THC and metabolites will also be in other parts of your system and be excreted on a time frame as discussed above.

Other factors previously discussed, such as the weed strain and potency, the amount used and how often, and the amount of body fat you have affect how long marijuana hangs around after the high wears off. In addition to body fat, age can be a factor as older people might clear the drug more slowly because of reduced liver metabolism and kidney function. 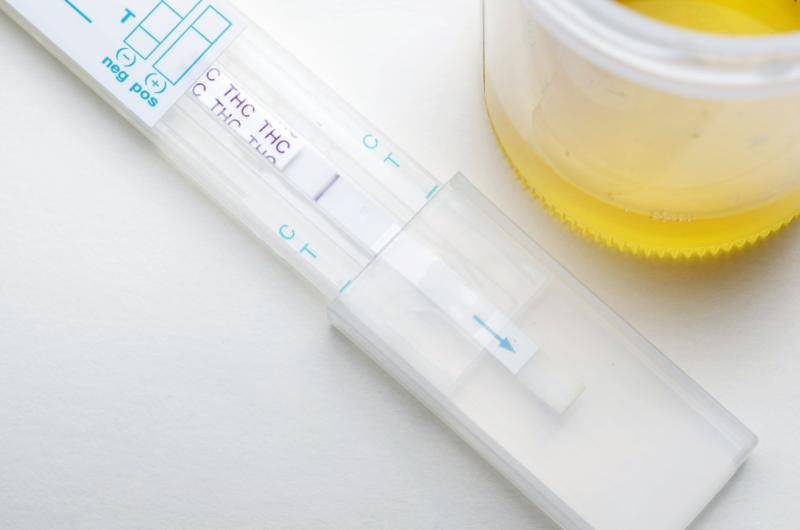 THC and its metabolic products can be detected in urine, blood, stool, hair, saliva, and nails. The following information on the tests most often used is based on a 2006 review in Therapeutic Drug Monitoring:

For routine drug testing, urine is the specimen most often used to detect if you are a pot user.

Because cannabis can have a long life in the body if you are a chronic user, it might be difficult to tell if a positive urine test means new drug use or the presence of previous drugs still being excreted.

Blood testing is the second most common test done, usually to see if you used marijuana recently. Detection of THC and metabolites in your blood usually indicates you recently used weed.

Detection of marijuana in hair indicates a history of pot use. Weed metabolites can show up on hair testing months after you use the drug, even if you are not using now. However, it is difficult to interpret the results with accuracy. This is because, unlike other drugs, THC and THC-COOH are not highly bound to hair so they are hard to measure. Hair can also be contaminated with these chemicals through second-hand marijuana smoke so it might not accurately reflect your pot use.

Many pot users who are facing a drug test are interested in ways to speed metabolism and elimination of marijuana from the body. Users mention the following ways to try to dilute urine concentration of THC and metabolites or "flush out" the chemicals quicker from their system:

None of these methods are scientifically tested.

Not Worth the Risk

Multiple factors affect how long marijuana stays in your body. Therefore, you might find it difficult to know when you will be clean for a drug test. Given the current US federal regulations and general workplace polices, it is best to avoid or limit habitual use of weed. In 2017, several states allow use of medical marijuana and an increasing number of states are also allowing use for recreational purposes.

Related & Popular
CBD vs THC: Differences in Properties, Benefits, and Effects
By Malia Frey
What Does Marijuana Smell Like?
By Aubrey Freitas
The Sober Curious Movement: What It Is and What It Means
By Malia Frey
Man Overboard: One Man's Struggle with Addiction
By Kelly Roper
Help in Overcoming Cocaine Addiction
By Kelli Dunham
How to Quit Smoking Weed
By Kathleen Esposito
Video Game Addiction
By Dana Hinders
Facts About Alcohol Poisoning
By Karen Frazier
Alcoholism Statistics
By John Ziemba
Drug and Alcohol Treatment Centers
By Marcelina Hardy, MSEd, BCC
Effects of Marijuana on the Brain
By Kathleen Esposito
Long Term Effects of Heroin
By Jodee Redmond
Defining When Your Drinking Has Become Alcoholism
By Gabrielle Applebury
Gambling Addiction Symptoms
By Kathleen Esposito
Effects of Using Crack Cocaine
By Lovetoknow
Heroin Use Pictures
By Lovetoknow
© 2022 LoveToKnow Media. All rights reserved.
How Long Does Marijuana Stay in Your System